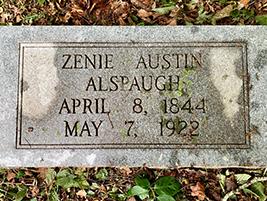 I am Mary Zenab Austin Alspaugh. I was born at Lonesome on April 8, 1844 and I am the youngest daughter of William and Dicy Austin, who were the original occupants of the Lonesome cabin. But you must know that it was not called Lonesome back then.

In 1884, when I was 40 years old, my husband Josiah Clifton Alspaugh and I lived in the small town of Burns, Tennessee which was only about a half mile from here. My mother and father had both passed away,  and the cabin was deeded to me. My husband and I offered the cabin to my mother-in-law, Emily Clifton Alspaugh and her son, John Henry Alspaugh. They and some other Alspaugh family members lived there for several years in the late 1800s. There’s a photo of Emily on the front porch on the occasion of her birthday.

So you may wonder how Lonesome got it’s name. Well, I’m the one responsible for it. The year was 1916 and I was talking to my foster-daughter Betty Austin Kimbro. Betty as you may know, was known to all as “Aunt Betty” and she spent many summers at Lonesome later in her life. But getting back to the story, Betty and her husband, Jack Kimbro, were newlyweds and on that warm spring day they decided to go on a picnic down to the cabin. They had a blanket, and basket with some bread and a little glass hen containing some peach preserves that I had just made that morning. I looked at them and said, “You look like Mr. and Mrs. Suburb going to Lonesomehurst.” You may wonder what or where Lonesomehurst is. Well it was from a newspaper cartoon that was popular in the early 1900s. It was called “Living in Lonesomehurst” and was about a family who moved to the suburbs. The city-folk thought that they were completely nuts and were certain that wild animals would attack them out there in the wilderness! So when I saw Betty and Jack getting ready to hike down to the cabin, that’s when I uttered those famous words. The name Lonesomehurst stuck and over the years was shortened to Lonesome. 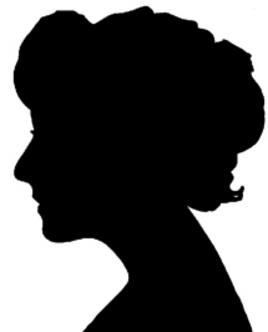