Sedimentary rocks are the predominant rocks found throughout Tennessee.  Limestone is found just about everywhere in Tennessee and was declared the official state rock in 1979. Limestone is most abundant throughout middle Tennessee. Limestone can be found at the bottom of the creek bed as well as on outcroppings found near the creek. This limestone would have been used to build the foundation of the Lonesome cabin as well as for barns and outbuildings.

Lonesome is located right next to a limestone quarry and has been since the early 1800s. The stone for the Lonesome chimney / fireplace came from the limestone from the hill right behind the cabin. A quarry is a type of open-pit mine in which rock is taken from the ground. Limestone is a useful rock and can be used to make cement and concrete. Ground up limestone is used as a soil conditioner to neutralize acidic soils too. A quarry also can be bad for the environment. It can interrupt the open space ruining habitats for plants and animals. It can cause soil erosion and water quality.

Tennessee was not always a land environment. About four billion years ago the area which is now Tennessee was completely covered with water. The inhabitants of our state during this time were creatures like algae and jellyfish. The bottom of this sea had layers and layers of sediment. This accounts for the abundance of sedimentary rock in this area of Tennessee. 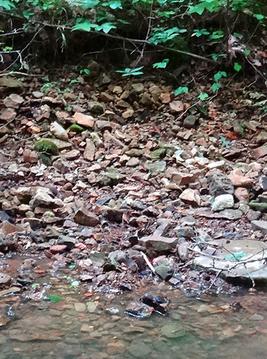