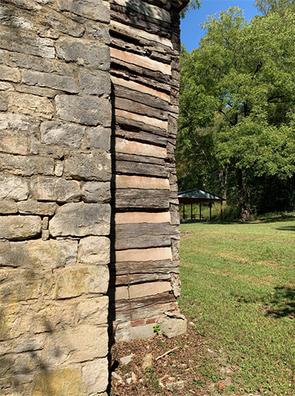 The log cabin suited early settlers. Wherever there were forested areas, the log cabin became the preferred type of home. Log cabins did not even need nails to hold them together. Until the 19th century nails were made by hand by blacksmiths, which meant they were quite expensive. The use of simple machines and tools was all that was available when Lonesome was built.

Log cabins were relatively easy to build. Men would cut down trees, trim them, drag the logs to the building site, notch the logs, and build a cabin with chimney and fireplace. With the help of neighbors, it was possible to build two-story log houses. Skids of two logs were placed against the wall at an angle to serve as an inclined plane. Then forked sticks or ropes were used to position the logs.

Most log cabins had a single room or “pen.” There was one door, and usually no windows. Most log cabin builders placed the fireplace at one end of the cabin and built the chimney of available rock. Limestone was available for Lonesome. Fireplaces provided warmth, light, and fuel for cooking. These fireplaces and chimneys were built by hand using hammers and chisels.

Inside walls were often chinked with clay or cloth. Some cabins had floors of puncheons - logs split lengthwise and laid close together with the flat sides up. All of this work was done by hand, without the use of our modern power tools. A family often built a sleeping loft if the roof was high enough. The loft was used for sleeping and to store food.