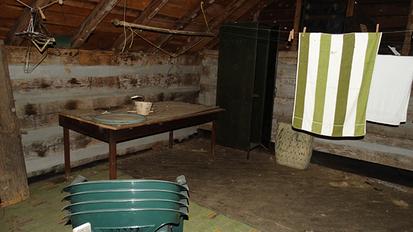 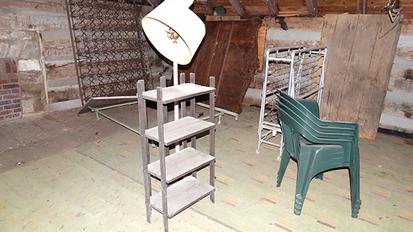 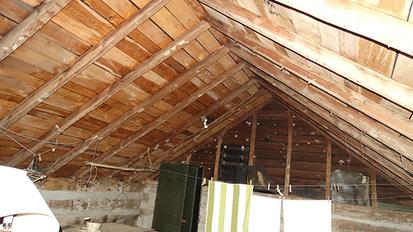 The upstairs at Lonesome was where family members slept. This is one large room that was large enough to accommodate several beds and mattresses. Fortunately for those sleeping upstairs, this room contains a fireplace that is tied into the chimney from the downstairs fireplace. This would have provided much - needed warmth as homes at this time would not have had insulation for keeping in the heat and keeping out the cold. The floors would have had some warmth due to heat rising from the downstairs fireplace.

Everyone had a straw or corn husk mattress on their bed, but if elderly parents were a part of the home, they were usually the ones given a comfortable feather bed. By the mid-1800s, cast-iron bed frames with cotton-stuffed mattresses were used by the middle class.

When the cabins were built in this time period, a professional builder would be engaged to oversee the work of the owner and his workers. Under his guidance, the truss log-beams that form the roof pyramid were pre-made in the yard and matched to each other, since they are all slightly different in length and shape. To keep each pair of matched beams together as they were hoisted up into place, the builder marked each pair with Roman numerals.  Lonesome has 18 pairs of beams holding up the roof, and you can see these marks clearly if you shine a light on the ceiling of the second floor.

The practice of marking beams with Roman numerals actually helped verify when Lonesome was built!  Prior to 1821, the Roman numeral four was represented with four uppercase I’s, but beginning in 1821, all builders decided to use the more modern version of the Roman numeral four, IV. The Tennessee historical commission inspected the property in 2012.  When they found that Lonesome’s fourth roof beam was marked with four uppercase I’s, they were able to validate that the cabin had indeed been built before 1821!

Compare ways individuals and groups on this farm slept in the past to how we sleep today.

Research and construct a timeline to depict the evolution of how and where people slept over time.

Back to Teacher Page
View on Mobile