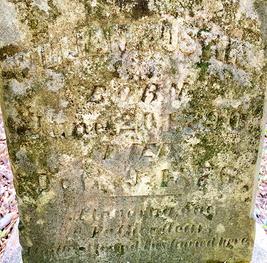 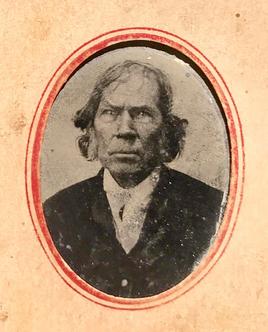 My name is William Green Austin. I was born on June 20th, 1790  in  Orange County , North Carolina.  I think North Carolina then actually stretched all the way to the Mississippi River. I had 5 brothers and sisters. My father died when I was only 14 years old  and my mother, Ruth Kelly, remarried David Passmore. When my family heard that there was great farm land in the Tennessee territory, we traveled west with  a wagon train of other pioneers, and found a suitable site west of Nashville (Nashborough at that time) in what is now Burns TN. When I was 22, I fought in the war of 1812, and in return was given 800 acres of land by Andrew Jackson,  my commanding officer, who later became the first president of the USA from the state of Tennessee. My parents built this log cabin called Lonesome, and we occupied it in the year 1821. We cleared the land and farmed all our lives, which was very hard work. We had two slaves who helped us immensely and were treated almost like  part of the family. In fact, they are buried with the rest of the family in this very cemetery.

I married Dicy Horner at age 29, in 1819  when she was only 19  years of age. Dicy and I had 12 children during the next  24 years. Life was very difficult for us. There were no doctors close to us, and four of our children died in one year during the typhoid fever epidemic, before reaching adulthood. We were very religious and helped found the local Burns Methodist Church here in this area.

During my life, there were many changes, but the greatest was  the Civil War, which devastated the region. One of my sons, Calvin Franklin Austin, fought in the Civil War and walked home from Virginia afterwards as a wounded veteran. I hear that the family still has his walking stick all these years later. Though I am 20 years older than Abraham Lincoln, he  and I lived during the same difficult times, ending with the Civil War, and his assassination. His presidency had a great effect on our lives, because of the Civil War.

Back to Graves Page
View on Mobile